Tips For a Tonsillectomy For Your Kids- Day 5-7 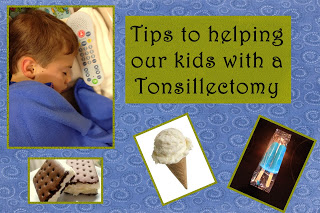 Days 5-7 went by slowly for me. Only because my son felt great, but still couldn't be too active. Around day 7 is when the scabs fall off, also being the highest risk of bleeding days. The more he gets his heart rate up, the more risk of bleeding he was. Those days were mostly about keeping my son on the couch. He is so active just when he had to use the bathroom he couldn't just get up and walk over, he had to jump off the couch and run to bathroom. On the way back he treated the toys on the floor like they were hot lava and hop scotched his way back summersaulting back to his sitting position. This was no easy task. 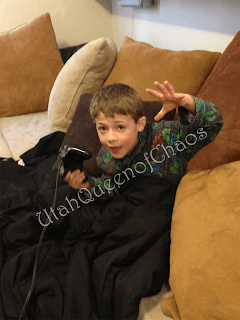 I mostly handled it by gaming it up. That's right I played more Mario Kart and Mario Bros in those few days than I have in the past few years combined! Not to mention, watching Pokémon, Spiderman, and several card games.

Kadan did really well eating. We started with soft rolls torn into tiny pieces than moved to mashed potatoes. Then he did some frozen go gurts, and spaghettio's. By day 5 he was ok eating spaghetti with no sauce and scrambled eggs. By day 7 he was fine with peanut butter and jelly, chicken nuggets and macaroni and cheese. After day 7 he was pretty much up to his normal picky diet.
Overall it ended up being a good pleasant experience. We had no problems, and enjoyed spending a week bonding together doing nothing but eating junk food and being couch potatoes. What 7 year old wouldn't want that?
Posted by Jennifer Davis at 6:00 AM