As a member of the church of Jesus Christ of Latter Day Saints when I watched this I wondered, how many actors in this was also a member of the church.  One thing that many don't know when making lds films is that not all the actors are actually lds. Actors are hired to do just that, act. They hire people to act, look and sound like they are lds missionaries, but may or may not be.

This movie had only a handful of individuals who were actually lds. Which they didn't even know till after that had been done casting. One funny story goes a little like this. When they were doing their first read through one of the actors approached Garret and said to him, If you want this to look authentic I'm going to have to shave. I actually served a mormon mission and missionaries are always clean shaven. They both had a good laugh when they both realized that they were both in fact LDS. They also assured him that he would have to shave when it came time to film. In the end there was 1 lds actor for every missionary companionship.


There is still time to go see Freetown, visit http://threecoinproductions.com/films/freetown/ for more information. 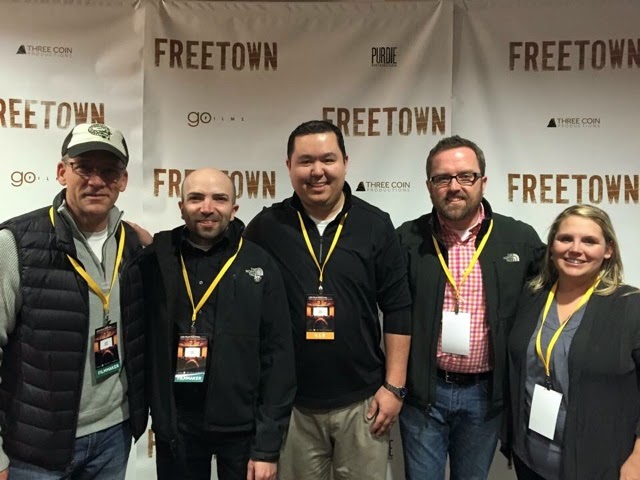 On today's fact that I learned when I interviewed Garrett Batty and Adam Abel. Just like many of you I was curious how this movie came to be. After Garret Batty did The Saratov Approach he was asked by many of you to do another movie like that. "More high stakes yet faith affirming movies," is what Garret kept being asked to make.


One day he was reading some pioneer stories on lds.org. They were actually pioneer stories from people in other countries and culture. He then stumbled across this one. It was actually a bunch of letters from the missionaries to their mission president about their experiences trying to travel to a safer place in Liberia during their civil war.

Garrett and Melissa Leilani Larson started writing the script in the fall of 2013, In May 2014 a few spent 2 weeks prepping and doing pre production needs in Africa.  Then they officially started filming end of August right after the release of Saints and Soldiers: The Void.

That's a little bit about how the movie came to be. Hope you are enjoying this little facts and the movie Freetown!
Posted by Jennifer Davis at 11:00 AM No comments:

Freetown came out yesterday, and I'm hearing nothing but good things. Here's what I promised, another fact about Freetown.
Since I've started acting I've been a lot more aware of some of the behind the scenes and how some stuff works. One thing I wondered when watching the movie was how much of the cast and crew were from the U.S. and how many were from Africa? 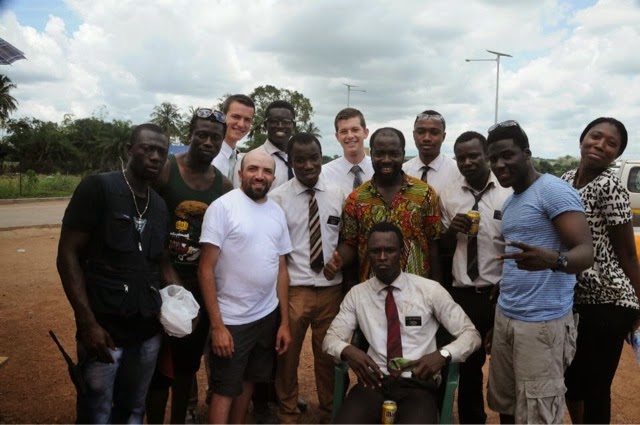 To answer the question only 6 of the crew members were from the United States. Everyone else was hired in Africa.  I know what you are thinking, wasn't the mission president white? Well yes, yes he was. He was one of the six that flew in and he was actually part of he crew. So it worked perfectly. 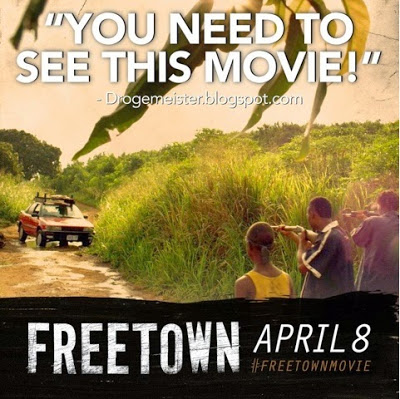 Have you gone and seen Freetown yet?  Make sure you get your tickets, before all you hear is how awesome it is and how much you missed out! Today is the first day of fun facts about the movie Freetown. I was able to interview the director Garrett Batty and producer Adam Abel. I found some fun things out about the making of the movie. So go see Freetown and come back here every day till Saturday to find out more.

Fun facts today in the movie Freetown is it was filmed in Ghana. Even though the movie was based in Liberia it wasn't actually Filmed there.  They recently released the movie in Ghana and it was very well received. They even found a way to go to one of the main villages that they filmed in to show it to the people. They got access to a projector and screen and everything. The villagers loved watching it and seeing their homes and themselves in it. They'd cat call and point out places or people of familiarity. It was a fun way to give back to the people after interrupting their usual life and allowing them to film in their village.

Posted by Jennifer Davis at 1:00 PM No comments: 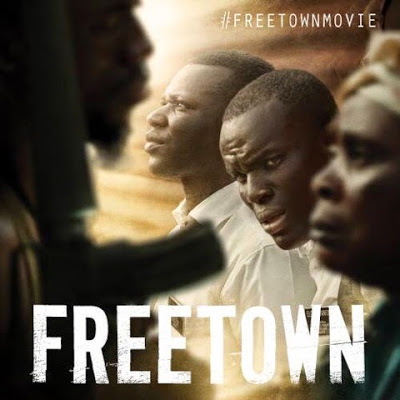 I was super excited when given the opportunity to review the new film Freetown. I have been following and supporting the progress of the movie over the past few months and am so excited for the release this week. In fact it is so good I am bringing to you a week of Freetown! I have this review posting today (obviously) and then 4 more days of posts. I promise you are going to see this movie and then want more. More history of the facts, more history of  the making of the movie and more about the cast. So come back on April 8th and the following 3 days to see what cool things I learned about from speaking to Adam Abel and Garrett Batty! (and I'm ok with you being jealous that I interviewed them ;) 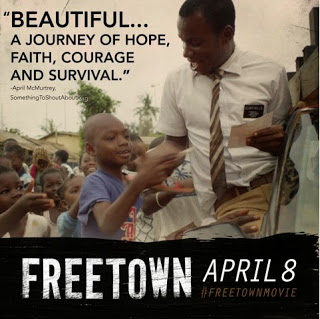 Freetown is a film similar to The Saratov Approach in the sense of missionaries going through struggles in life and relying on their faith to get through them.  It is also based on a true story.  The movie still has suspense, hope, and remarkable odds to be beat.  However this movie has its own unique story to be told.

It's is about a group of missionaries in Liberia during 1990 when they were in the middle of their own civil war. A group of missionaries set on a journey to save one of their own from the ultimate persecution.  The movies suspense is very come and go. Moments wondering what's around the corner, or are they go to make it through the next check point, will their car and budget allow them to be delivered to their mission home in Freetown? There are also lots of moments of breathing sighs of relief and laughs of comedy. There's a lot of scenes I love but one of my favorites is when the missionary takes some passed out guards beer and says, "what? I'm saving lives!"

I love historical fiction. It is one of my favorite things to read. So the story and history in this was fascinating to me. How even though this happened 15 years ago how common this is even in our world today.

This movie grips you from the go. You are fascinated with the way the story unfolds. You find yourself fearing for and cheering for the characters instantly. I loved the cultural music, clothing and even scenery is fascinating. The shots of the little red car among the beautiful foliage of Africa makes me feel like I'm there watching it for myself.

The importance of this movies success depends on how opening weekend does.  So please go see it this week! Request it at your local theater. Share the trailer. Share this review. Share Freetown.


Opens this week, April 8th. Here is a list of theaters it is currently available at:  http://threecoinproductions.com/theaters/

Posted by Jennifer Davis at 2:27 PM No comments: